At least one person is dead and four others injured after a shooting in a Toronto suburb Sunday, Toronto police said.

Witnesses in Etobicoke said they saw a man get out of his vehicle and begin shooting at the intersection of Willowridge Road and Eglinton Avenue West around 2:30 p.m. ET, police said on Twitter. The man was seen shooting into another vehicle. 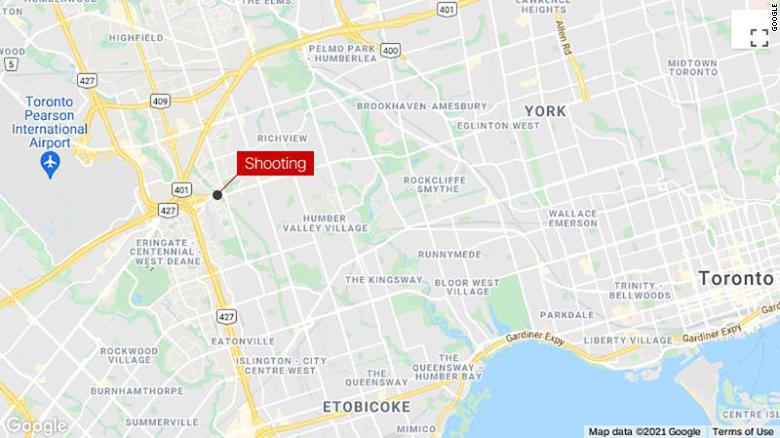 “We did find someone who’s ‘vital signs absent,’ and now recently, we know that one person has succumbed to their injuries and has been pronounced (dead),” Toronto Police spokesperson Constable David Hopkinson told CNN. “Whether it is that person (with vital signs absent) or one of the other victims, we don’t know.”
Toronto Police said they found five victims at the scene. Paramedics took four people to a nearby hospital in serious condition, and at least one person went to the hospital on their own.

Help show the Moffitt family our love and support

Sergeant Moffitt, was injured last week while on-duty (see link for details). Due to the continued outpouring of support, a gofundme has been created to focus the donations for Sgt Moffitt and his family. Please join me in showing the Moffitt family our love and...

END_OF_DOCUMENT_TOKEN_TO_BE_REPLACED

A Woods Cross police officer accused of firing several rounds at a vehicle driving away from him now faces two felony criminal charges. Joshua John Lindsey, 39, of Kaysville — who was fired from the department — was charged Tuesday in 2nd District Court with two...

END_OF_DOCUMENT_TOKEN_TO_BE_REPLACED

The 247 Help Group is your source for Utah Lawyers that handle cases throughout the state and felony crime charges of all types, including: Assault and battery Aggravated assault Robbery Sexual assault, rape, statutory rape, etc. Weapons offenses or enhancements...

END_OF_DOCUMENT_TOKEN_TO_BE_REPLACED

Last week a Marine infantry officer and battalion commander generated a wave of controversy online after he took to social media to air his frustrations with senior military leadership over their handling of the U.S. military’s withdrawal from Afghanistan and what he...

END_OF_DOCUMENT_TOKEN_TO_BE_REPLACED

— Rescuers in boats, helicopters and high-water trucks brought hundreds of people trapped by Hurricane Ida’s floodwaters to safety Monday and utility repair crews rushed in, after the furious storm swamped the Louisiana coast and ravaged the electrical grid in the...

END_OF_DOCUMENT_TOKEN_TO_BE_REPLACED

Are you accused of a sex crime in Utah? Install the 247 Legal Guardian today! Click the app anytime you need a criminal defense attorney, and we can have your location in 3 seconds. It records all events, and our 24hr support center will start connecting you with...

END_OF_DOCUMENT_TOKEN_TO_BE_REPLACED

When your freedom is on the line, you need more than a sales pitch.  You need straight talk from experienced Utah criminal defense attorneys with a track record of getting real results.   DUI Drug crimes Sex crimes Violent crimes White collar crimes Internet...

END_OF_DOCUMENT_TOKEN_TO_BE_REPLACED

Cragun Berube, P.C. is excited to announce that on July 6, 2021, will be merging with attorney Steve Farr and will become Farr, Cragun & Berube, P.C! We will also be expanding the services we provide to include personal injury, family law, and estate planning! To...

END_OF_DOCUMENT_TOKEN_TO_BE_REPLACED

The US 9th Circuit Court of Appeals has blocked a federal judge's controversial ruling that overturned California's longtime ban on assault weapons, in which he likened the AR-15 to a Swiss Army knife. In an order Monday, a three-judge panel on the federal appeals...